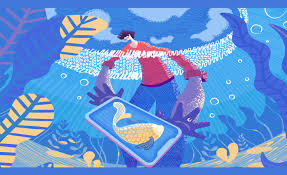 As we discussed before, with the advancement of the electronics and stepping into the, so called digital era, the possibilities for artists to express themselves grew rapidly and more freely. The first electronic handwriting device was invented back in 1888.

Since then, the technology became more sophisticated and many illustrators and designers are accustomed to using graphics tablets nowadays – devices, which are connected to a computer. Artists use the tablet’s pen and surface to draw and the device transfers the image in the opened drawing software – such as Phothoshop. Artrage, Ikscape and other. The software programs imitate different traditional brushes, pens, various drawing tools, paper and effects.

We can divide the illustrations produced digitally into two large groups:

As you can see from the pictures below, the freehand digital illustrations allow very smooth light and shadow transitions, making a complex background and fine detail. Most of these illustrations are in a raster format and they can be scaled up and printed only to certain sizes before they lose quality.

In the other group, we put vector graphics/illustrations. The way the images are produced allows scaling them up and down to any size, without any quality loss. By rule, it is harder to make a smooth transition with vectors but vector has its advantages in producing a certain style of imagery. This makes it very popular for web illustration. You can easily recognize the vector by its clear outlines, shapes, and definition.

We are quite sure the examples we have given so far are not nearly enough.

The first part of our guide in the world of illustration is half done and now we are moving to the next part:

We start with a small remark – by style, we mean the different genres in illustration (or at least the most popular ones). However, style is used also for the individual and very specific way of expressing of the individual artists, but this could be defined much harder if possible at all.

These types of illustration include Fantasy illustrations, illustrations for Gaming, Animation and One-Pager Fine Illustrations. The term concept first appreared back in 1930s, used probably first from Disney and it was used in the automative industry as well. In concept illustration, the artists creates several interepretations (concept) of a certain theme, from which the client can choose from and see the different stages, development and the process of creation of the illustration.

Children book illustrations can be very diverse – from realistic, full with details illustrations to very simplified, child-like, naive drawings. It depends on the story, the target age group and many more. Nevertheless, children’s illustrations are colorful, narrating, there is always something happening. The characters are cute and friendly.

According to Wikipedia comics is a medium used to express ideas by images, often combined with text or other visual information. Comics frequently takes the form of juxtaposed sequences of panels of images. Often textual devices such as speech balloons, captions, and onomatopoeia indicate dialogue, narration, sound effects, or other information. Size and arrangement of panels contribute to narrative pacing. Cartooning and similar forms of illustration are the most common image-making means in comics.

Did you know that luxury books on geographical topics and natural history, and some children’s books, had printed illustrations which were then coloured by hand but in Europe, none of the experimental techniques for true colour printing became widely used before the mid-19th century.

Today, a book illustration could be designed in any technique and then printed. This style is very versatile and depends on the vision of the authour and the subject of the book. Illustrators try to create eye-catching covers in order to compete with the piles of books in bookshops. It is a very specific style, which demands catching the viewer’s attention, giving a hint of what is inside the book and sometimes, it is the cover that sells the book (or publication).

While book and publication illustrations should be supporting and illuminating a certain idea, without stealing the show from the text, advertising type of illustration is meant to do just that – grab your attention and make a lasting impression on one big idea or brand/product. Many companies choose illustration as the medium to send their message to the audience, because the style better translates the idea than photography, for example.

The rise of digital technologies in the latter half of the 20th century allowed businesses to scale rapidly and become global. With unprecedented competition, packaging came to be the way of differentiating the product on the shelf. For some businesses such as jewelry, bakery, children’s products, illustration is the most successful choice. It offers personalized touch, elegance and custom feel.

Branding/Logo type of illustration isa very specific style, requiring a certain set of skills. For example, a logo should be recognizable and readable at smaller sizes. Therefore, the illustrator should carefully plan the details of the logo. Logos should be simple, yet grabbing attention and memorable. Sometimes, businesses need more than a logo illustration, but mascots, cartoonized version of their employees or products. With their help, the brands enhance their presence and impression on customers.